The Kerosene family are close cousins of the Diesels, including K-1 and K-2 Kerosene (obviously) and Jet-A.

Jet-A is a high-purity kerosene based fuel manufactured under a specific ASTM standard (D1655), with specific physical properties, and is used in jet turbine engines. Fuel not meeting the Jet-A specification is generally recycled in the production chain for other purposes (for example it may be used in blending kerosene for heating, or blended into highway diesel).

Jet-A is suited for turbine engines, but can also be burned in other compression-ignition piston engines like diesel can (there are a wide variety of aero diesel engines available from several manufacturers).

Other grades of Kerosene are used for motor fuels, cooking fuel (“camp stove fuel” is typically kerosene) heating, lighting, etc. depending on their refining and purity.

Avgas actually comes in several grades, all manufactured to an ASTM standard (D910), with specific physical properties and specific permitted and required additives (such as Tetra-Ethyl Lead – TEL). The grade (octane rating) of aviation gasoline is identified by colored dyes added to the blend. The colors used in the US are:

JP-8 is the military equivalent of Jet A-1 with the addition of corrosion inhibitor and anti-icing additives; it meets the requirements of the U.S. Military Specification MIL-T-83188D. It is the dominant military jet fuel grade for NATO airforces. The UK also have a specification for this grade namely DEF STAN 91-87 AVTUR/FSII (formerly DERD 2453). NATO Code F-34.

Aviation turbine fuel is a complex mixture predominantly composed of hydrocarbons and varies depending on crude source and manufacturing process. Consequently, it is impossible to define the exact composition of Jet A/A-1. This specification has therefore evolved primarily as a performance specification rather than a compositional specification. It is acknowledged that this largely relies on accumulated experience; therefore the specification limits aviation turbine fuels to those made from conventional sources or by specifically approved processes. Jet A/A-1 with Additives make JP8 (F-34). The two grades differ only in freezing point. Grade JET A has a maximum freezing point of -40°C and Grade JET A-1 has a maximum freezing point of -47°C. Kerosene-type aviation turbine fuels are distillates with a minimum flash point of 38°C. Aviation turbine fuel, except as otherwise specified in this specification, shall consist predominantly of refined hydrocarbons derived from conventional sources including crude oil, natural gas liquid condensates, heavy oil, shale oil, and oil sands. The use of jet fuel blends containing components from other sources is permitted only in accordance with the industry standards. Conventionally refined jet fuel contains trace levels of materials that are not hydrocarbons, including oxygenates, organosulfur, and nitrogenous compounds. Fuels used in certified engines and aircraft are ultimately approved by the certifying authority subsequent to formal submission of evidence to the authority as part of the type certification program for that aircraft and engine model

When temperatures are close to the fuel freezing point, fuel operability problems can be experienced. JET A, with a specification freezing point of -40°C, is not intended for use during extremely cold weather conditions or when the ambient temperature is close to, or below, -40°C. It also requires more restrictive use than JET A-1.

The testing and evaluation of a product against Can/CGSB-3.23 standard may require the use of materials and/or equipment that could be hazardous.

The accuracy of ASTM D7039 for the sulphur content of jet fuel beyond 2822 mg/kg sulphur has not been validated. Users are cautioned to conduct their own validation when using this test method for jet fuel containing more than 2822 mg/kg sulphur.

Only the additives listed below may be added to the fuel. Refer to the specified limiting values and test method for each property of Aviation Fuel. SGS on behalf of SML shall record and share the amount and names of each additive.

Only N,N’-disalicylidene – 1, 2-propane-diamine may be added as a metal deactivator at a concentration not exceeding 2.0 mg/L (not including mass of solvent) on the initial fuel manufactured at the refinery. Higher concentrations are permitted in circumstances where copper contamination is suspected to occur during distribution. Cumulative concentration of metal deactivator when re-treating the fuel shall not exceed 5.7 mg/L.

When specified (see 8.1.2) and agreed by the supplier and the purchaser, a fuel system icing inhibitor conforming to ASTM D4171 (Type III [DIEGME]) shall be added to the fuel.

When specified and agreed by the supplier and the purchaser, a corrosion inhibitor/lubricity improver qualified to U.S. Military Specification MIL-PRF-25017 and listed in the associated qualified product list (QPL) 25017 shall be added to the fuel. The concentration of the additive in the fuel shall be as specified in the QPL, and its introduction into the fuel shall be separate from the addition of other additives.

Samples for testing shall be obtained in accordance with ASTM D4057. For automatic sampling ASTM D4177 shall be used. 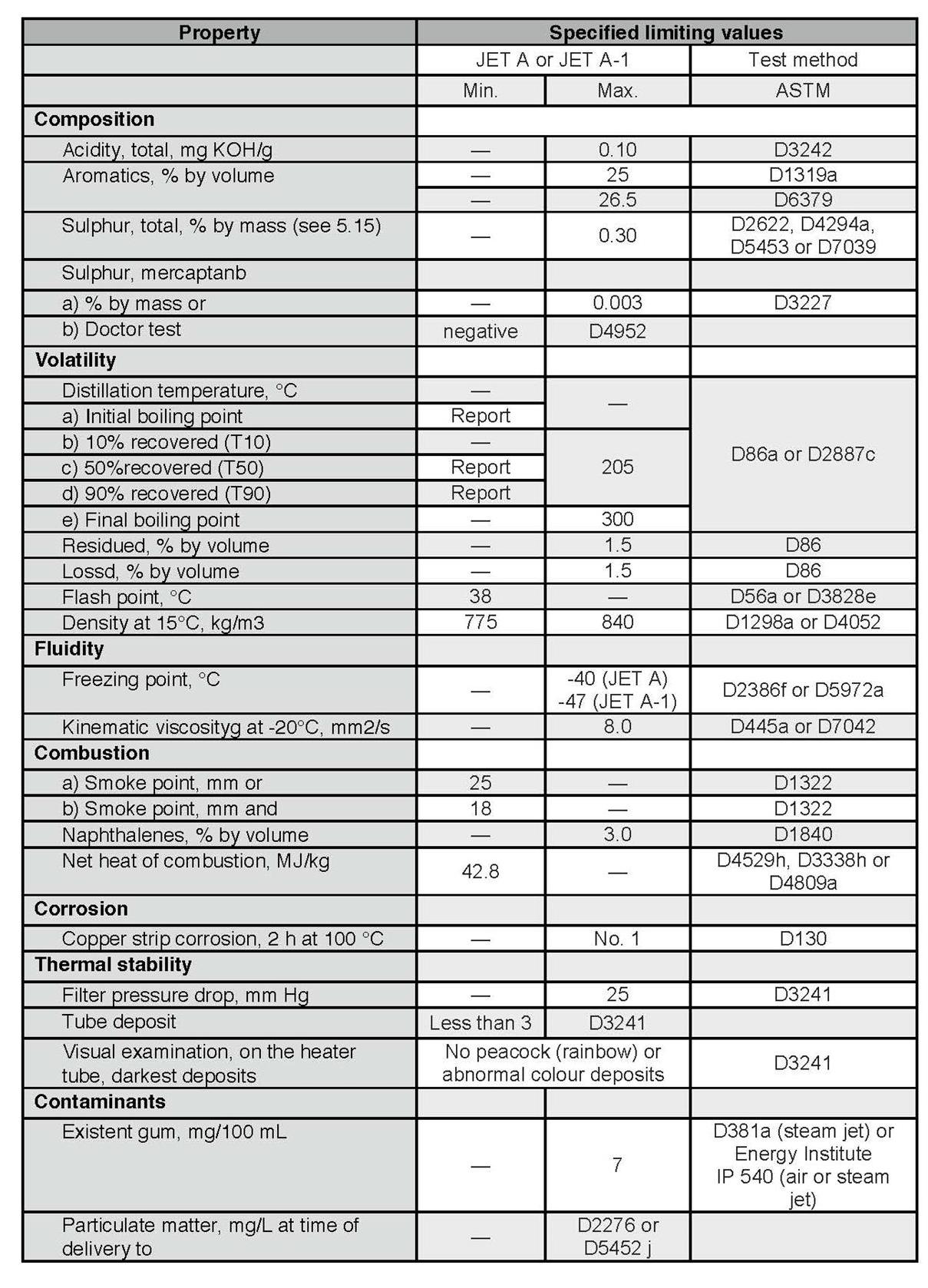 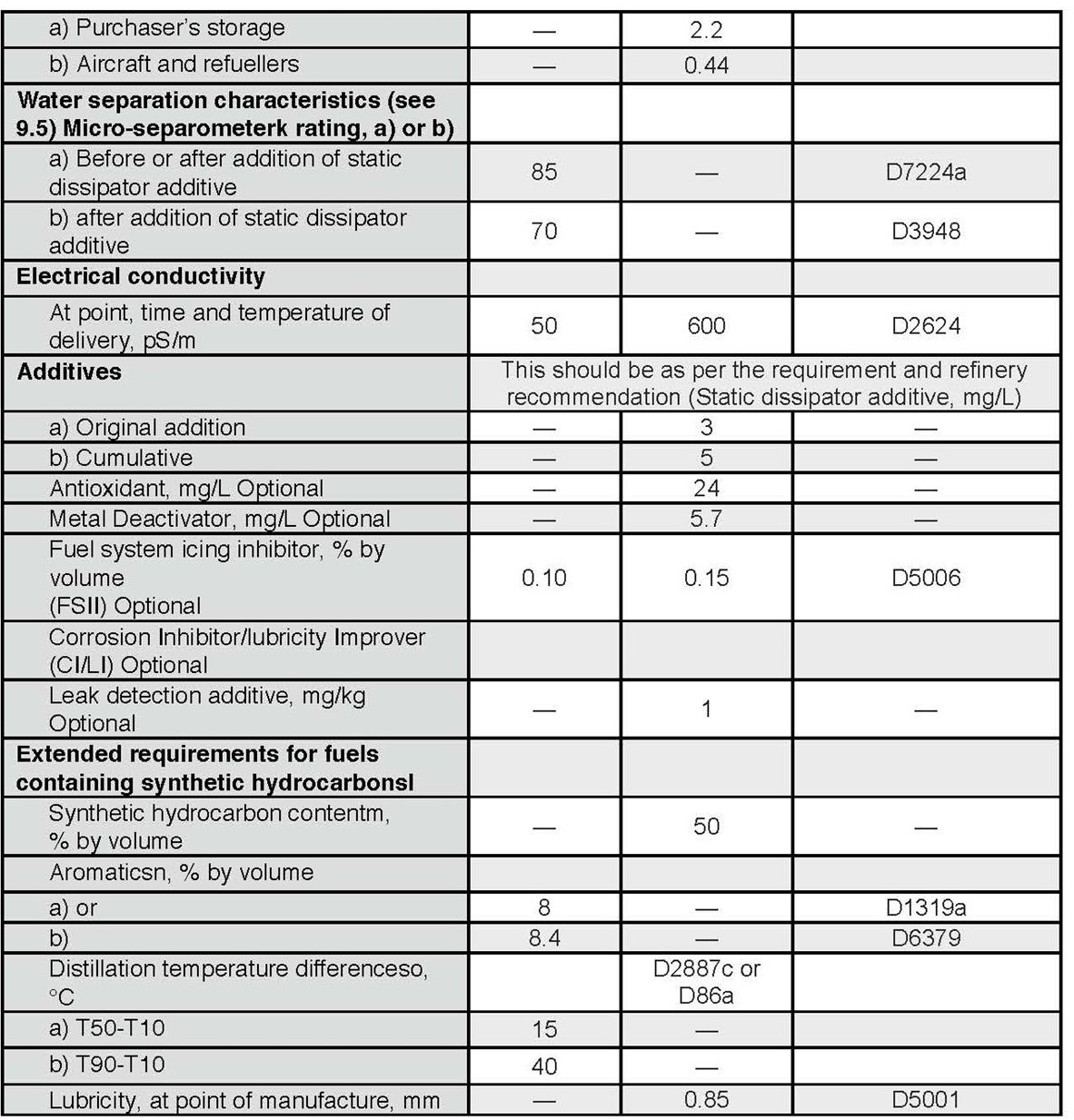 a. In the event of a dispute, this method shall be the referee method.

b. The mercaptan sulphur determination may be waived if the fuel is considered “sweet”, and receives a negative result by the doctor test described in ASTM D4952.

c. When testing in accordance with ASTM D2887, apply the relevant Annex to convert distillation temperature results to estimates of ASTM D86 results.

d. If ASTM D2887 is used to determine distillation temperature (see 5.5.1), then residue and loss requirements shall not apply because no residue or loss results from the application of ASTM D2887.

f. CAUTION: Results from two extensive round-robin tests reported in ASTM Research Reports 1536 and 1572 demonstrated that the manual freezing point test ASTM D2386 could only detect heavy material contamination (e.g. diesel fuel) in JET A and JET A-1 fuels in less than half of the cases tested, whereas the automatic freezing point test ASTM D5972 was effective at detecting such contamination in all cases tested.

h. Calculate and report the net heat of combustion corrected for the sulphur content when using these empirical test methods

j. ASTM D2276 and D5452 refer to different sampling procedures. In some situations it may not be practical to sample according to D2276; however, when results are obtained by both methods, D2276 shall be considered the referee method.

The minimum micro-separometer (MSEP) rating applies from the point of manufacture to the point immediately before the fuel enters dedicated transportation to airport storage. MSEP by ASTM D7224 can be useful in determining the water separation characteristics of a batch of jet fuel even when additized with static dissipator additive and certain other additives that do not actually degrade water separation performance in coalescing separators. When the fuel enters dedicated transportation to airport storage, or when the fuel is already in airport storage, the MSEP rating requirement shall not apply. When a fuel system icing inhibitor (see 6.5) or a corrosion inhibitor/lubricity improver (see 6.6) is added, the MSEP limits apply before its addition. For clarity MSEP results shall be reported by test method (i.e. MSEP by ASTM D3948 or MSEP by ASTM D7224). Conductivity often drops during fuel distribution due to additive depletion and lower temperatures, as noted the limits also apply at point of use.